The studies typically conducted during early clinical development (Phase I and Phase II) have a variety of objectives. These early clinical trials must establish above all that an investigational medicinal product is safe for humans. They also try to show that the medicine is effective against the intended disease or condition.

The following key questions must be answered during early clinical development:

Although medicines development is typically represented as a chronological series of phases, the studies that are performed within each phase are typically classified based on their objectives. As shown in the diagram below, studies that are typically part of an earlier phase may be performed later on in the medicines development process as emerging data suggests the need for additional information.

The logic behind representing medicines development in a series of consecutive phases comes from the idea that the results of prior studies should influence the plans for later studies: emerging data will frequently initiate modifications of the development strategies.

The starting dose for SAD/MAD studies is determined based on the results of non-clinical toxicology studies. The dose is then increased according to escalation schemes which are laid out in regulatory guidance documents. The studies are stopped according to stopping rules, which include toxicity and absent toxicity (maximised exposure, maximised pharmacodynamics, etc.). The key principles of Pharmacokinetics – the study of the effect the body has on a medicine – are represented in the acronym ADME.

ADME studies are usually performed using a single dose of the medicine in a small number (usually four to six) of healthy males (to exclude possible harm to women of child bearing potential), through the intended route of administration. These studies are typically associated with Phase I of development, but they may be performed throughout the development of a medicinal product.

ADME studies also provide information on bioavailability – that is, the fraction of an administered dose of active pharmaceutical ingredient (API) that reaches the bloodstream.

Bioavailability (BA) and Bioequivalence (BE) studies

Bioavailability studies evaluate the rate and extent of absorption of a medicine. They investigate the concentration of the active pharmaceutical ingredient (API) in the bloodstream over time. 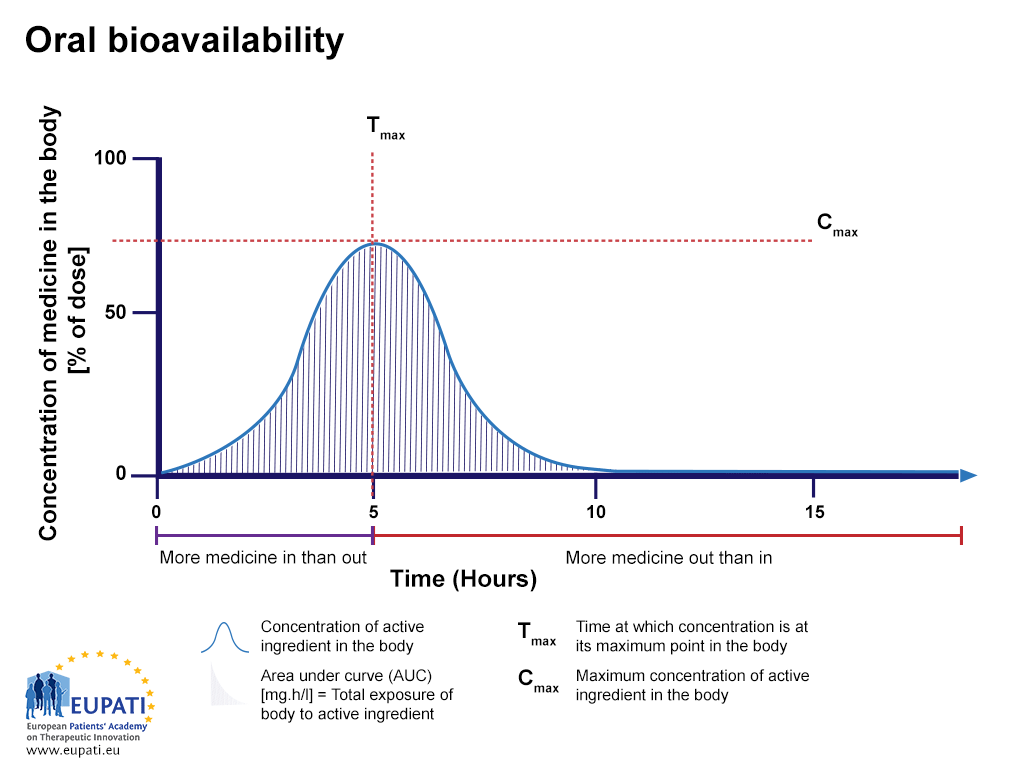 These studies are typically run as crossover, randomised, single-dose studies in healthy participants. Researchers measure the concentration of the medicine and its major active metabolites in participants’ blood and plasma.

Bioequivalence studies investigate the relationship between two different formulations. They also study the rate and extent of absorption of a medicine, but they compare these with the rate and extent of absorption of another medicine or a different formulation of the same medicine (reference formulation/medicine). Bioequivalence studies are used to compare generic medicines with their reference medicines. There are set criteria that a medicine must fulfil before it can be considered bioequivalent with another medicine.

Food effect studies evaluate the effect of food on the rate, extent, and bioavailability of medicine absorption in a given formulation. The information from food effect studies is important for the administration instructions that are put in the package leaflet (PL) instructing whether the medicine should be taken on an empty stomach or with meals.

These studies are typically single dose, crossover studies that compare two conditions: participants who have fasted versus participants fed with a high-fat, high-calorie meal. The study usually has two sequences, and is performed in healthy participants using the highest anticipated strength of the medicine.

Renal impairment studies are run as single dose, parallel group studies in healthy male and female volunteers (around six per group). The groups are stratified based on renal function biomarkers.

If the medicine is metabolised by an enzyme that only occurs due to genetic variation, then participants should be assessed based on their genotype status.

These studies are guided by previous in vitro results; they are preferably conducted using a crossover trial design. Medicines interaction studies are conducted in healthy volunteers or in patients if it is desirable to evaluate pharmacodynamic endpoints when medicines are too toxic (for instance, anti-cancer medicine).

Typically, these studies use a crossover trial design. The dosage, dosing intervals, number of doses, routes, and timing of co-administration should be designed to maximise the possibility of detecting an interaction and should mimic the clinical setting. The amount of interaction (inhibition/induction) is classified by the change in absorption of one of the investigational medicinal products, calculated as the area under the curve (AUC) of the substance.

TQT studies are conducted in vivo for all new molecular entities (NMEs). They must take place prior to Phase III trials, regardless of in vitro or non-clinical findings.

Typically, TQT studies are conducted as single dose crossover studies in healthy participants. Researchers evaluate therapeutic and supratherapeutic (greater than therapeutic) doses of the medicine against a positive control (such as a common antibiotic like moxifloxacin) and a negative control (a placebo).

Back to the top^
We use cookies to ensure that we give you the best experience on our website. If you continue to use this site we will assume that you are happy with it.OkPrivacy policy