In the traditional paradigm of clinical trial design, each new treatment must go through a strict development process. After successful Phase I trials, a Phase II trial is needed to show sufficient efficacy and safety. When this has been demonstrated, the medicine goes into Phase III trials, where it is compared with a standard treatment (control). Doing this for each treatment separately requires a long period of time, a large number of patients, and substantial financial resources. Additionally, in the traditional approach, modifications are not allowed during the course of the trial.

There are many reasons to use adaptive designs (or adaptive pathways) in clinical trials. In an environment subject to economic challenges, adaptive designs appear to be appealing for pharmaceutical industry, academic institutions, clinicians, and patients.

Adaptive designs are relatively flexible clinical trial designs, allowing for modifications during the course of the trial in order to streamline and optimise the process. Analyses of the accumulating study data are performed at pre-planned time points within the trial, can be performed in a fully blinded or unblinded manner, and can occur with or without formal statistical hypothesis testing. It is important that the process is modified only in such a way that the validity and integrity of the trial are not affected.

Adaptive designs can pose operational challenges because of their complexity, and the process of adapting a trial can introduce bias. This bias can be either statistical or operational – for example, if an adaptation suggests that the results of a trial point in a certain direction.

The adaptive design may improve trial efficiency for the sponsor and the participants in the trial. However, if it is not properly conducted, there is a high risk that such a trial can generate clinical results that are difficult to interpret or translate into daily practice.

Clinical trials for rare diseases are typically small of necessity. Planning a small clinical trial, particularly for a rare disease, can present several challenges. Small trials exhibit more variability than larger trials, which implies that standard designs may lead to trials adequate only for large effects.

The specific requirements of rare disease trials make adaptive designs particularly appealing. Classical trials for rare disease are typically powered for large effects. The power of a statistical test is the ability of the test to detect an effect, if the effect actually exists. In statistical terms, it is the probability that it will correctly lead to the rejection of a null hypothesis.

However, it is important to recognise what an adaptive design can or cannot do in the case of rare diseases. Most importantly, adaptive designs cannot make a medicine more effective. They can, however, identify ineffective treatments earlier. Such early identification can minimise the resources allocated to the study of an ineffective treatment and will allow the redistribution of resources to more promising treatments.

The term ‘adaptive’ covers a varied set of designs, but most of them follow a simple structure. Within an adaptive trial, there are learning and confirming stages, which follow a similar approach to the overall clinical development process across multiple trial settings (Phase I, Phase II, and Phase III). As a result, changes might be made to hypotheses or the design parameters.

The most commonly used adaptive design is trials with early stopping rules for futility (when the treatment or trial is not producing any useful results) or efficacy.

These rules are predetermined and are verified by one or more interim analyses. They prevent the participants from taking medicines that will not provide a beneficial effect or are unsafe. Most importantly, if it is found that the trial medicine is clinically more effective than the control, it would be unethical to continue administering the less-effective control medicine. Early stopping rules for futility allow a halt in the administration of a less-effective control medicine.

There are also designs where treatment arms are dropped over the course of a trial, or where a sub-population is selected based on a biomarker of interest.

Some designs allow for sample size re-estimation, for instance an increase in the patient population if the results appear promising.

Adaptive randomisation is another example of an intuitively appealing design. In this design, a higher proportion of patients would be treated with the ‘better’ arm (if there is one). These adaptive trial designs are mostly based on unblended interim analyses that estimate the treatment effects – meaning that the analysts are aware of which treatment participants have been allocated to.

A group sequential design is a typical example of a Phase III trial with rules for early stopping for futility or efficacy. In the example trial depicted in the diagram below, patients were randomised between the first line treatment with either one medicine alone or two medicines in combination.

There were two interim stages where it was possible to stop the trial early and performing analysis before all the trial results are gathered. The trial could have been stopped:

Group sequential design is a classic example that is often forgotten when thinking about adaptive design, as it was already in use before other adaptive designs became more commonplace. Adaptation opportunities are planned upfront in the trial design, this results in the power and Type I error or sequential tests to be relatively easy to adjust when conducting multiple tests. This maintains the overall power and Type I error.

Group sequential design allows for early stops on the basis of progression-free survival or overall survival. In this example, participants were randomised onto one of two arms, and received either Treatment 1, or a combination of Treatment 1 and Treatment 2.

The multi-arm, multi stage (MAMS) trial is a new paradigm for conducting randomised controlled trials which makes use of an interesting adaptive design.

MAMS trials allow the simultaneous assessment of a number of research treatments against a single control arm. MAMS trials provide earlier answers and are potentially more cost-effective than a series of traditionally designed trials.

In this example, we see a design that uses multiple arms and stages at the same time. 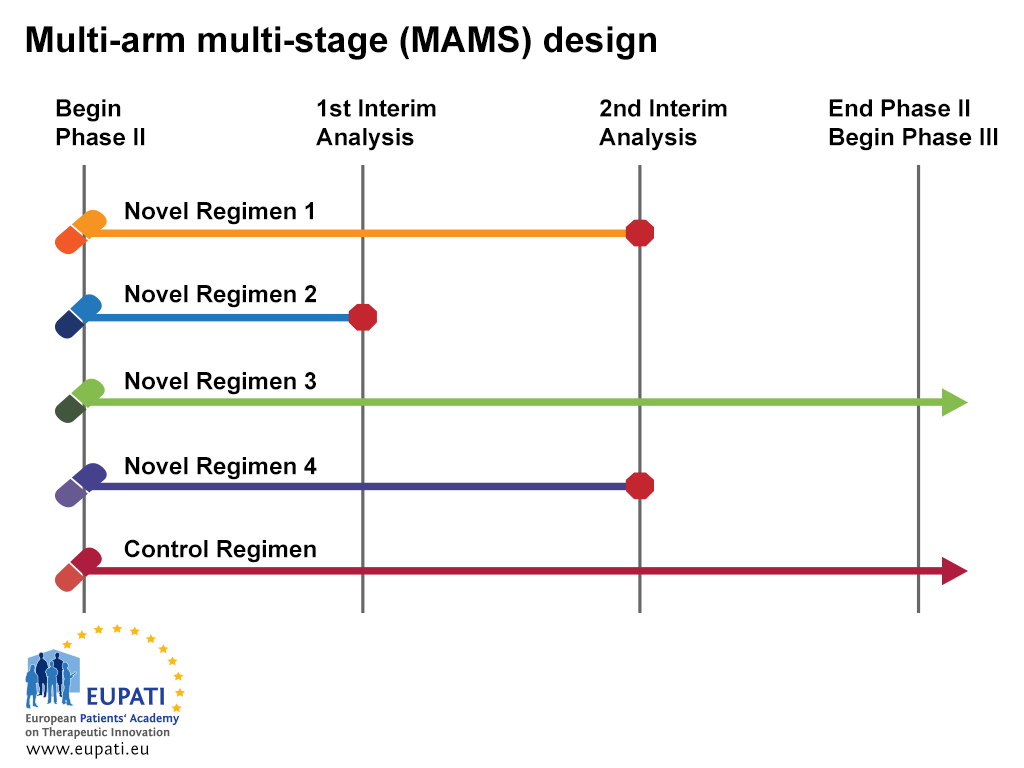 The multi-arm multi-stage design (MAMS) allows multiple treatments to be tested simultaneously against a single control.

Advantages of the MAMS design:

Seamless Phase II/Phase III design is often used in the case of rare diseases; it is also called a ‘combination test’. In the example below, patients are randomised between three treatment arms in the first stage of the design (Phase IIb). The first treatment arm is the control arm, where patients receive the standard of care therapy. Patients on the second and third treatment arms receive different treatments, Treatment 1 or Treatment 2.

The seamless Phase II/III design allows Phase II and Phase III to be performed in the context of one trial.

Patient input into adaptive design can help researches identify the most appropriate design by helping to define and understand the needs and requirements of the patient population. Patients can also be involved in the Data Monitoring Committee.

From a regulatory perspective, it is important to maintain the validity and integrity of adaptive designs in clinical studies: