This article focuses on the European Union (EU) legislation and guidelines from the European Medicines Agency (EMA). It does not detail national legislation or guidance outside of the EU. The roles of patient organisations are described at the EMA level.

The European Medicines Agency (EMA) is responsible for the scientific evaluation of human and veterinary medicines in the European Union.

The EMA has been engaging in dialogue with European patients and consumers since it was founded in 1995. As users of the medicines that the EMA evaluates, patients are key stakeholders in the EMA’s work and have specific knowledge and expertise to offer.

Patients and consumers are involved in many activities at the EMA, ranging from reviewing information prepared by the EMA on medicines, to being involved in the preparation of guidelines, to taking part in scientific advisory groups and being members of the EMA’s scientific committees.

To date, the implementation of community legislation has resulted in patients being members of four of the EMA scientific committees: the Committee for Orphan Medicinal Products (COMP), the Paediatric Committee (PDCO), the Committee for Advanced Therapies (CAT), and the Pharmacovigilance and Risk Assessment Committee (PRAC). Patients are also represented on the EMA Management Board. 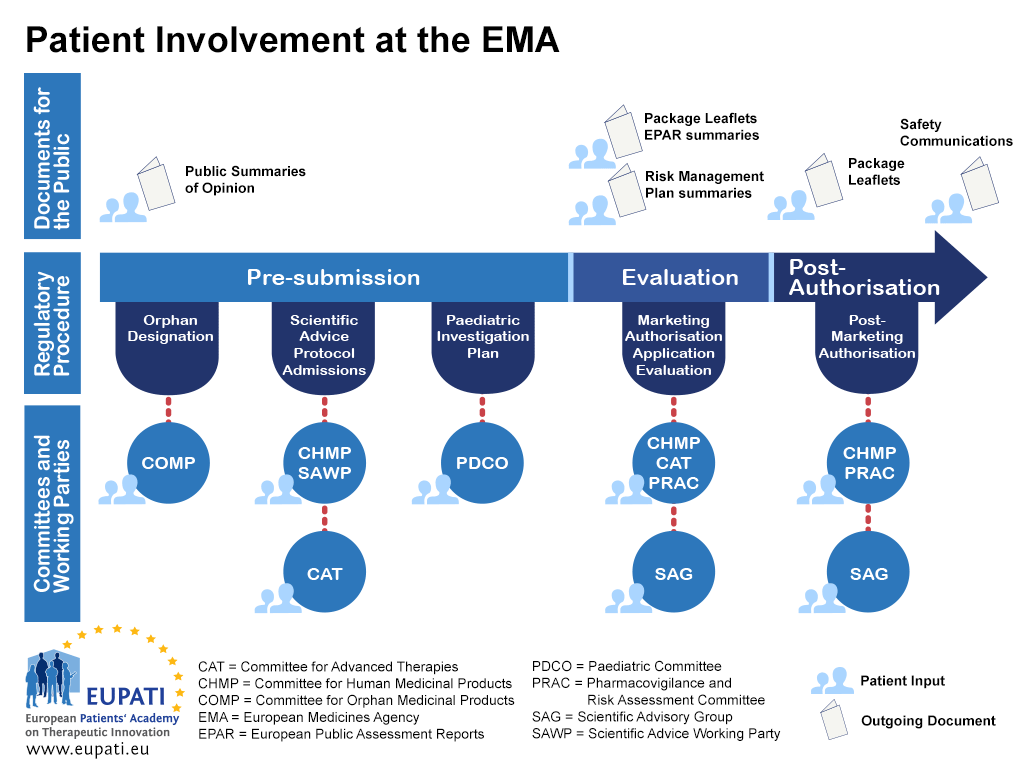 Patients can be involved at the EMA in a variety of different ways throughout the regulatory procedure.

The COMP includes in its membership three members nominated by the European Commission representing patients’ organisations since its first meeting in April 2000, for a renewable term of three years.

The PDCO includes in its membership three members and three alternates appointed by the European Commission representing patients associations since September 2008, for a renewable term of three years.

The CAT includes in its membership two members and two alternates appointed by the European Commission representing patients associations since January 2009, for a renewable term of three years.

The PRAC includes in its membership one member and one alternate appointed by the European Commission representing patients associations since July 2012, for a renewable term of three years.

The role and value of patients as members of scientific committees

Patients who are members of EMA scientific committees act in the same way as all other members. Experience has demonstrated that patients very often contribute scientifically to the discussion. The added value of having patients and consumers in the scientific committees is a unique and critical input based on their real-life experience of being affected by a disease and its current therapeutic environment. The patient’s efforts should focus on ensuring that this unique perspective is delivered throughout the committee’s activities and outcome.