History of vaccines – The case of Cowpox

Who knew that cows would save the lives of countless humans? In 1796, a physician named Edward Jenner decided to prove a theory that had been circulating for some time. Smallpox once killed millions of people worldwide. Cowpox was a less serious disease related to smallpox that milkmaids often caught through exposure to infected cows. Jenner noticed that milkmaids who had contracted cowpox were later immune to smallpox. Jenner tested this theory when he took some infected cowpox matter and exposed an otherwise healthy boy through a cut in his arm. After the boy caught and recovered from cowpox, Jenner exposed him to smallpox via an injection. The boy remained healthy, and the world’s first vaccine was born. According to the national Centers for Disease Control and Prevention (CDC) the world’s last case of naturally occurring smallpox was in 1977. The disease has since been eliminated from natural occurrences in the world, so the vaccine is no longer given. (https://health.howstuffworks.com/wellness/preventive-care/vaccine.htm)

It should be noted that such experiments would not be able to take place today, all medical research involving humans must meet regulatory standards (https://ec.europa.eu/health/human-use/clinical-trials_en) and receive a positive opinion from an ethics committee (http://ec.europa.eu/research/swafs/index.cfm?pg=policy&lib=ethics). How does a vaccine work?

The immune system and vaccines

The immune system is one of the body’s natural defenses against pathogens (disease-causing micro-organisms, for example, a virus or bacteria).  When a pathogen enters the body, the immune system:

When a person gets a vaccine, the immune system responds in the same way it would to the real pathogen (recognises, responds, remembers).

There are two broad categories into which most vaccines fall: Preventative (prophylactic) and Treatment (therapeutic). Though they are similar in some ways, they result in slightly different outcomes.

Preventative (prophylactic) vaccines are substances that prepare the immune system to fight pathogens and provide immunity to a disease. They are made using inactivated or weakened versions of the disease-causing pathogen or parts of the pathogen (called antigens). For some vaccines, genetic engineering is used to make the antigens used in the vaccine.

Like Preventative vaccines, Treatment (therapeutic) vaccines introduce antigens associated with an illness. The difference is that the goal is not to teach the body to fight against a new kind of illness, but rather to encourage the body to fight harder against an illness it already has.

For example, Treatment vaccines that are under development for cancers might introduce antigens created by tumours. This would effectively teach the body’s immune system to attack that antigen, as well as the cancerous cells that produce it. A therapeutic vaccine for HIV, might introduce more HIV antigens into a body. This can help to strengthen an existing immune response and help the body contain the infection.

Vaccination is the use of vaccines to protect from infectious illnesses. Immunisation is the process of becoming immune to (i.e., protected against) a disease. Immunity can be provoked by vaccines or by having been previously sick from the disease; for instance, a person maybe become immune against chickenpox after having the infection, or thanks to the vaccine which prevented the disease. Vaccination helps both prevent and fight a disease.

Vaccination also protects unvaccinated people through community immunity, also known as herd protection: when a large enough majority of people are vaccinated and because they are immune, they do not transmit the disease. Community immunity therefore indirectly protects those people who are not able to be vaccinated (for example individuals with allergies to components of the vaccine) and reduces the number of persons likely to contribute to the spread of a disease. 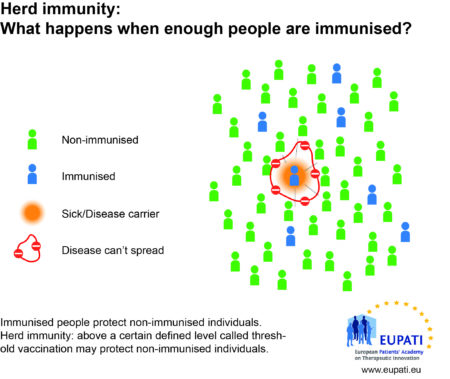 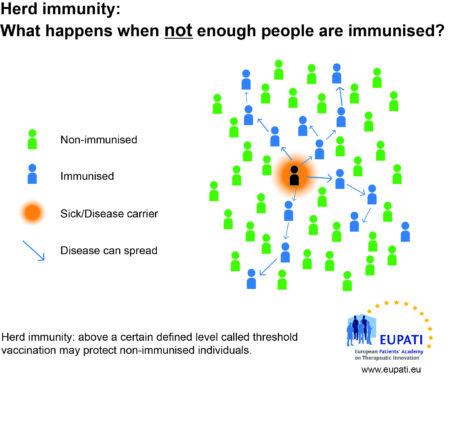 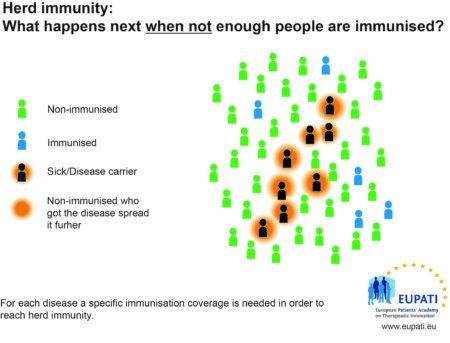 When and how to get vaccinated?

Immunity can be life-long, and is therefore beneficial if given to children, or will require periodic “boosters” to ensure continued immunity. The age range for which a childhood vaccine is developed and recommended as part of the immunisation schedule takes into account the age which the immune system can tolerate vaccine components, potential interference with the immune response from maternal antibodies, and the age at which a child is most at risk for disease transmission and mortality.

Certain vaccines are able to generate an immunologic memory similar to that generated by natural infection, which often confers life-long protection, whereas other vaccines may require boosters over time to maintain immunity. You may need repeated administration of a vaccine to build-up immunity.

The WHO publishes recommended vaccines which are adopted by many member states around the world. https://www.who.int/immunization/policy/Immunization_routine_table1.pdf?ua=1

The EU publishes recommendation for vaccination schedules for European Citizens, based on the risk of exposure to pathogens that are typically found in Europe, you may be required to have additional vaccinations if you travel to regions where you will be exposed to different pathogens. https://vaccine-schedule.ecdc.europa.eu/