Bioavailability is defined as: the fraction (percentage) of an administered dose of unchanged medicine that reaches the blood stream (systemic circulation).

When giving an injection directly into the bloodstream, i.e.an intravenous injection (IV), the bioavailability is defined as 100% (see figure below).

If the same active substance shown in the figure above is given via another route, such as a tablet given orally (by mouth), the bioavailability is lower than 100% (see figure below, Oral bioavailability). 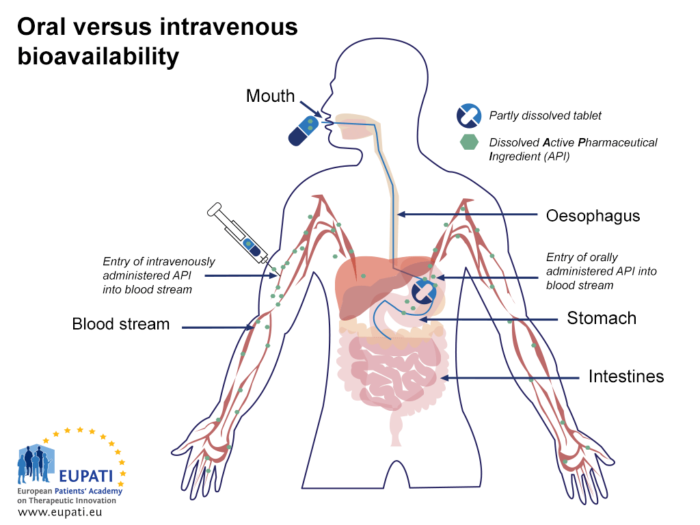 After a tablet or capsule is swallowed, it reaches the stomach within a minute or two.1 In the stomach, the tablet or capsule is dissolved, and some of the active substance is absorbed into the bloodstream. The components are transported to the small intestine where absorption is completed. Absorption from the gastrointestinal system can vary greatly. Lower bioavailability can be the result of poor or no absorption from the stomach and the intestines, so this step is an important one that can influence availability.

Briefly, in absolute bioavailability the standard is always IV.

Bioavailability is affected by a number of other factors, which are particular to any one individual. See the attached fact sheet for some examples of bioavailability.

Bioequivalence is the relationship between two preparations of the same drug in the same dosage form that have a similar bioavailability.

The relative bioavailability is used not only to compare different formulations, but also when two tablets (or any other medicines with same formulation) with the same active substance from different pharmaceutical companies need to be compared. The tablet from company A is referred to as a generic medicine relative to the reference tablet from company B (branded medicine). To see whether tablet A is bioequivalent to tablet B, the bioavailability rates of the two are compared.2